Over 250 people are rescued from the canyon each year. The difference between a great adventure in Grand Canyon and a trip to the hospital (or worse) is up to YOU. DO NOT attempt to hike from the rim to the river and back in one day, especially during the months of May to September. There are no easy trails into or out of the Grand Canyon!

My husband and I, along with six other hiking buddies, had long had a dream hike. This was it, but, according to Backpacker magazine, it was also one of the top-ten most-dangerous hikes in the U.S.

Part of the plan for the hike was to stay overnight at Phantom Ranch, voted one of the best lodges in the United States. The ranch, situated right on the river, is the only facility and campground nestled at the bottom of the canyon, and its location in the middle of the dry canyons makes it seem an oasis.

Unfortunately, we had not been able to get through to the ranch’s reservation desk to obtain a permit, and so, reluctantly, we decided to make the adventure just a day hike.

The day of the hike, we took a chance and called Phantom Ranch one more time. To our delight, not only did we get through, but we were able to get a last-minute reservation. Now we could do our hike the way we had planned.

Arriving at the Grand Canyon from Las Vegas, we hit the ground running. We had already packed some sandwiches for dinner and enough clothing to stay one night at the ranch, and so we began our descent immediately, at 5:00 p.m.

Seven and a half miles long, with a series of steep switchbacks and breathtaking views, South Kaibab Trail is the quickest way—but also the steepest—to reach the canyon bottom. Initially, we were slowed down by the amazing scenery along South Kaibab Trail—we kept clicking our Canons and Nikons till we reached “Skeleton Point.” During our short break there, we made a decision that, for the rest of the way down, we would ease up on the photography and concentrate on the descent to the bottom of the canyon.

As twilight came, we enjoyed spectacular color changes in the canyon walls, but then the sun slipped below the horizon, and we had to get our flashlights out. The next part of the descent would be in darkness.

Finally, at 9 p.m., we reached Phantom Ranch, and we were starving. We wolfed down our sandwich dinner, and then checked out the rooms. The dorm rooms, separate for men and women, were spartanly, but pleasantly furnished with bunk beds, hot showers and toilets. We all slept soundly, and, in the morning, we woke to the sounds of chirping birds and rushing water. We wanted to enjoy our brief stay in the beautiful surroundings, and so we took a leisurely walk around, had our coffee and breakfast, picked up a bagged lunch from the ranch, and filled up our camelbacks. At 9 a.m., we were ready to begin the ascent to Bright Angel Trail.

For the first part of the hike, we walked alongside the river and enjoyed amazing panoramic views of the canyons and rushing water. Through a series of switchbacks, we reached the midpoint, Indian Garden, and stopped to have lunch and refill our canteens.

The next part of the ascent was particularly steep, and so we took our time—and plenty of electrolyte boosts for our calves, which were beginning to feel like spaghetti.  By 5 p.m., we were back at the top. We breathed a sigh of satisfaction and rewarded ourselves with some well-deserved drinks at the Bright Angel Lodge Lounge. We had completed our dream hike at last—and just the way we had wanted to do it! 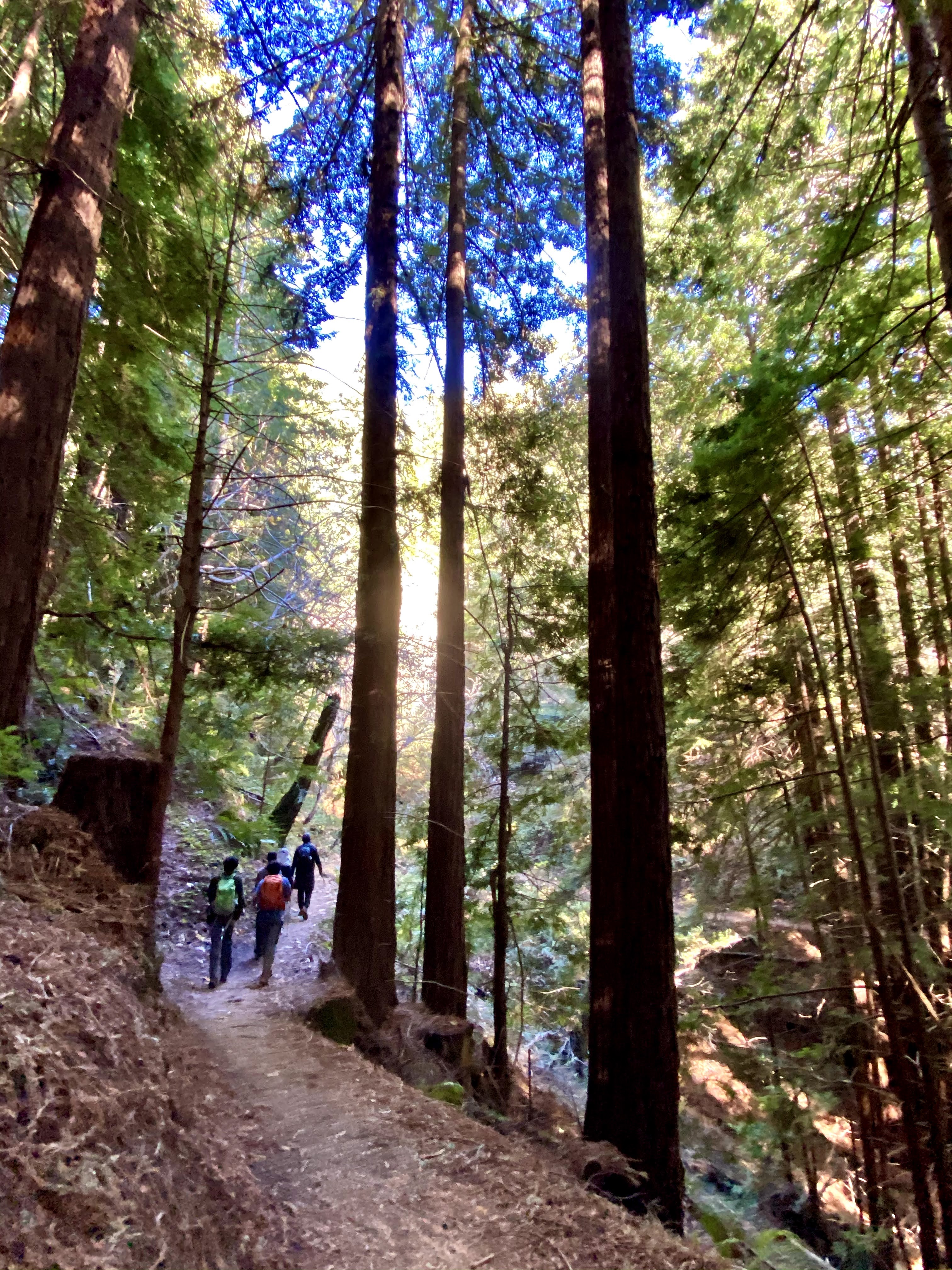 Harkins Ridge, Crag Britton, Purisima Creek loop Distance: 8 miles Difficulty: Moderate Elevation Gain: 1700 ft 12/20/2020 There is something about being in the woods that I love, I am sure some you may relate to that. I feel fortunate to live so close to the majestic redwoods and local regional parks with endless hiking […]

Wildcat Gorge, Meadows Canyon and Curran Trail Distance: 3.5 miles loop Elevation Gain: 500 ft Difficulty: Easy 11/22/2020 Not too far from home, Tilden’s wildcat gorge trail follows picturesque stream first, it then descends to the canyon and opens up in the meadows. This trail has fantastic views and still displayed some autumn colors when […]

West Shore and Bass Cove Trail Distance: 5 miles Difficulty: Easy Elevation Gain: 700 ft Lake Chabot is so close to home. The regional park is developed around a reservoir and there is a perfect ~10 miles of hiking trail encircling the lake, which is well-maintained. You have an ability to do either the east […]

Trailhead: Stinson Beach Elevation Gain: 1656 ft Distance: 6 miles 10/17/2020 With almost 3000 five-star reviews on AllTrails, this loop is Marin’s best! Starting at Stinson beach, the trail goes up to the Pentoll Ranger station in Mount Tamalpais Park. As you start hiking up from the Pacific Ocean, this trail passes through gushing streams, […]