Most dentists agree that toothpicks should be used sparingly as a method of teeth cleaning and should never be considered a substitute for brushing teeth and flossing. Fact is they should be used only when a toothbrush or floss is not available, for example, when you are in a restaurant and have food trapped between teeth.

Toothpicks that are used overzealously can damage tooth enamel, lacerate gums, and even cause a broken tooth in severe cases. People who have bonding or veneers can chip or break them if they aren’t careful. Overly aggressive use of toothpicks can severely wear the roots of teeth, especially in cases where gums have pulled away from the teeth and leave teeth with root surfaces exposed, notably in the elderly. 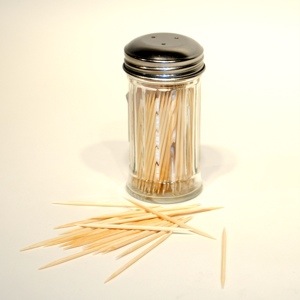 Toothpicks date back to 3,500 BC when the earliest known oral hygiene kit featuring a toothbrush was found at the Ningal Temple in Ur. In China, a curved pendant, made of cast bronze was worn around the neck and used as a toothpick. In 536 BC, the Chinese mandated a law that required the use of the toothpick because their armies suffered from bad breath. In the Old Testament, it is written that “one may take a splinter from the wood lying near him to clean his teeth.”

Today, most toothpicks in the United States come from “toothpick trees” in Maine. The tree is a white birch which has its trunk cut into thin sheets that are cut again to the thickness and length of toothpicks.

Dentists can tell when they have a habitual toothpick user in their dental chair. There are the tell-tale signs of toothpick marks. So use them if you have too, but don’t make it a habit. Brush and floss instead.

He said that our body was giving us a clue that this was not where we should be, we didn’t belong at this altitude and we should reserve the higher mountains for the creatures who called it home. Our body is designed to survive at much lower altitudes where oxygen is plenty for us to survive. If our lungs are gasping for air, it’s our clue that we should leave.

Tennessee Valley Trail is a short 3.5 mile nature walk. Beautiful trail is covered with this mysterious fog and the air is filled with soothing aroma from the Eucalyptus trees lining the trail…

Of course, my summit fever kicked in when I visited Crater Lake. In a search for the best `bird’s Eye’ view of the lake, I must climb the highest available point on the rim. Garfield Peak provided just what I was looking for.

This one was my favorite of all we have done this season, challenging due to a lot of elevation gain very quickly (over 3000 ft in 3.5 miles) reaching to 13,061 ft to the top of the second highest peak in Yosemite, Mount Dana – fun trail filled with wildflowers, wildlife, scree, snow fields, stellar views of the Mono Lake and High Sierras from the summit and a quality family time